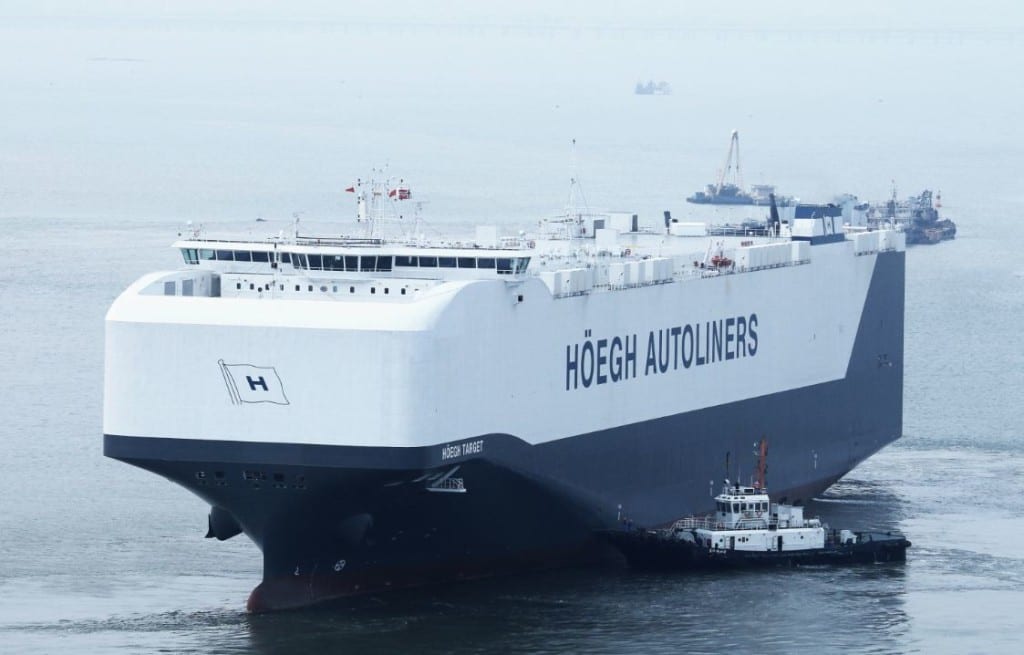 Höegh Autoliners’ Höegh Target is the first in a series of six Post Panamax vessels under the New Horizon design that will be delivered over the next 18 months. The ship has deck space of 71,400 square metres and carrying capacity of 8 500 car equivalent units.

“The launch of Höegh Target is a milestone in the Company’s history. This is the first Post Panamax PCTC that we have taken delivery of and the New Horizon design truly represents state of the art engineering.” says Steinar Løvdal, Head of Capacity Management in Höegh Autoliners.

Höegh Target is, together with its sister vessels, designed to minimise its impact on the environment. Energy efficiency principles have been followed throughout the ship design process and the latest technology in the market has been implemented. Attention has also been paid on optimising the hull form in order to combine high cargo capacity and low fuel consumption. Extensive model testing has been carried out to achieve outstanding performance. In addition to calm water performance, special focus has been paid on added resistance in heavy seas and wind resistance.

“In Höegh Autoliners, we have a deeply held belief in the necessity of taking responsibility for the environment in which we operate. It is with great pride that we name a vessel that is estimated to emit 50 per cent less CO2 per car transported than a standard car carrier.” says Steinar.

The ship’s maiden call in Southampton came at the end of a voyage to Europe from East Asia, and her return sailing will take her back to East Asia via Africa and Oceania.

SCH has serviced Hoegh ships calling in Southampton for some 25 years and Operations Director Kevin Hume explained: “The introduction of the Hoegh Target will further enhance the capability of the Hoegh fleet and we were delighted to welcome the ship on her maiden call. Hoegh is one of the port’s longest serving customers and we are committed to working closely to ensure that the line continues to receive the highest levels of service when calling in Southampton.”