Port terminal operators Southampton Cargo Handling (SCH) have been awarded a three-year contract by Royal Caribbean Cruises Lines (RCCL) to provide passenger and stores services for their cruise ships calling in the Port of Southampton.

The latest agreement extends a relationship between SCH and RCCL that has spanned more than ten years, during which time RCCL has helped Southampton to become the leading cruise port in Europe. 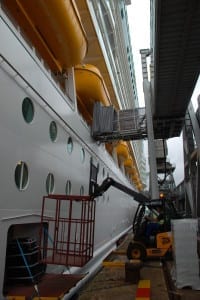 RCCL, including sister companies Celebrity Cruises and Azamara Club Cruises, will make more than 40 turnaround calls in Southampton this year, led by the introduction of its new 168,000 tonnes ship Anthem of the Seas, which will arrive on the South Coast next month after completion in Germany.

With space for 4,180 passengers, the Anthem of the Seas will be the biggest passenger ship calling in Southampton and will demand a major operation to handle passenger baggage and general stores during her regular disembark and embark calls. SCH will also be responsible for mooring and letting go the 348m. long ship.

In addition to the Anthem of the Seas, SCH will handle calls by RCCL’s Explorer of the Seas, Celebrity Cruises’ Eclipse and Azamara Club Cruises Quest during this year.

SCH Operations Director Kevin Hulme commented: “It will be an exciting year for RCCL and we are committed to maintaining a seamless port turnaround for their ship calls in Southampton. The size of the Anthem of the Seas will present its own handling challenges and we are already engaged in planning the processes that will help to provide passengers with the best possible service.”

Adam Sharp, Head of Port Operations and Guest Port Services for RCCL, said: “On many occasions the first person our guests come into contact as they arrive to begin their holiday onboard one of our ships is with a stevedore as they hand over their bags to be taken onboard. It’s imperative we have a professional, courteous and welcoming company which matches our experience onboard and we’re delighted to have SCH working so closely with us on this as they have done for a number of years since we arrived in Southampton.”

The contract extension with RCCL comes as SCH celebrates 25 years of operations, making it the Port of Southampton’s most experienced cargo and passenger handling company.