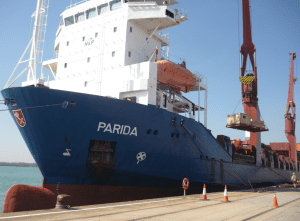 Hundreds of tonnes of gas turbine generators have been loaded out of Southampton Docks by stevedores SCH bound for Colombia.

The three-day operation to load containers, large crates and other casings, including turbines, power cables and controls, was the latest leg of a journey from the Siemens’ plant on Humberside to South America where the generators will be transported some 1500 kilometres inland. The power units will then be used to help pump oil through pipelines for onward distribution in Colombia.

SCH lifted part of the cargo onto the vessel MV Parida for storing below deck before the ship moved to another Eastern Docks berth where the remainder was towed on board using the ship’s stern ramp. Agents for the project cargo move were GP Shipping.

SCH Senior Operations Manager Mark Living explained: “We used a specialist team of stevedores with a wealth of experience in loading project cargoes.  These were heavy containers and crates loaded with a high value cargo that demanded a precise and careful operation.