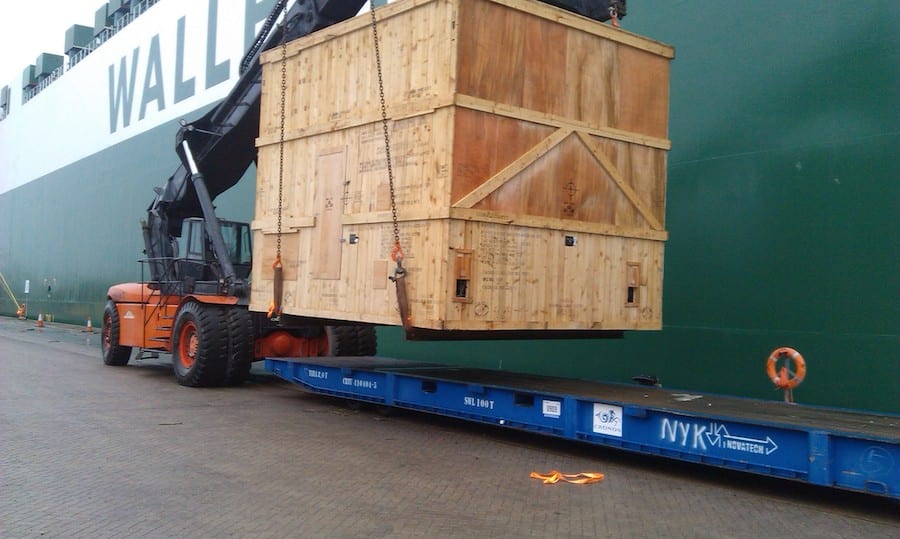 SCH has expanded its capability for handling high and heavy cargoes in the Port of Southampton with the acquisition of a dedicated reachstacker telescopic crane.

The high-performance Linde stacker .has capacity for loads up to 45ft in width and weighing up to 45 tonnes. It can be used for handling containers or out-of-gauge cargoes loaded on flat racks and the telescopic toplift spreader incorporates automatic self-levelling and hydraulic damping.

SCH, the port’s leading handler of heavy ro-ro cargoes, has seen an increasing demand for loading heavy cargoes on flat racks. Using its specialist heavy lashing expertise, the company also offers preparation of such cargoes for shipping through the port’s container terminal.

The new stacker will avoid the need to bring in dedicated mobile cranes for such work and will also enhance SCH’s capability to handle over-sized cargoes that it regularly loads on deep-sea ro-ro vessels.

SCH Operations Director Lee Davis said: “The reachstacker will provide us with a significant extra capability in preparing and loading over-sized cargoes, supporting the growing volume of our own ro-ro business and the specialist lashing  services that we offer for  third party out-of-gauge cargoes.”

The stacker has a Volvo 6 cylinder diesel engine equipped with turbo-charger and Intercooler and has an ergonomically designed fully adjustable drivers operating console. The extreme rigidity of the assembly in conjunction with carefully designed guides for the telescopic outreach movements provides for smooth, shock-free load handling in combination with low power requirements.