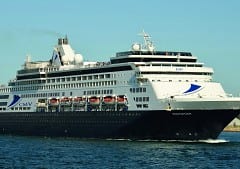 SCH has supported the latest addition to the Cruise and Maritime Voyages (CMV) fleet after the 27,000 tons Vasco Da Gama made her maiden call in Southampton.

CMV is already a valued customer for SCH and sister company Southern Maritime Services in Liverpool and Portsmouth respectively but it was the first time the group had handled the new ship since she was introduced into the CMV fleet in Spring this year.

SCH provided rope handling services as the ship made a one-day call in Southampton, with several hundred passengers venturing ashore to nearby attractions.

Vasco Da Gama, originally built in 1993 for Holland America Line,  will remain in Northern Europe for the next few weeks and is set to return to Southampton next month before heading into the Southern Hemisphere.

SCH Cruise Manager Paulo Oliveira explained: “CMV is an important part of our work in Liverpool and Portsmouth but it was also a special event in welcoming the line to Southampton. The fact that it was CMV’s new ship making the call added to the special occasion, with Vasco Da Gama the latest in a number of new cruise vessels that we have handled throughout the UK this summer.” 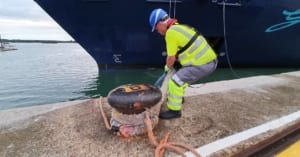